The 94-kg class at the USAW Junior National Championships yesterday was loaded with talent and had some big performances—most notably Ian Wilson’s 194-kg clean and jerk, for a new Junior American record. 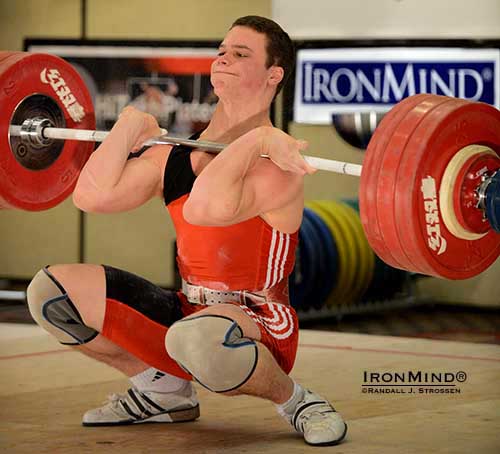 Look at Ian Wilson’s left foot as he hits the bottom with this 194-kg clean.  With a little work, Wilson stood up and then punched the bar overhead for a good lift and a new American junior national record in the clean and jerk.  IronMind® | Randall J. Strossen photo.


Wilson, who had set the stage for his clean and jerk record with an impressive 155 kg snatch, was part of the powerhouse Hassle Free Barbell Club; and another of its 94-kg lifters also made the podium: D’Angelo Osario continued to prove himself to be lifter on the rise as he pounded out a 147-kg snatch and a 180-kg clean and jerk for the silver medal in the total.  If that’s not enough talent in Hassle Free’s 94-kg stable, consider that another of their lifters, Ian Howerton, placed fourth overall, and yet another, Anfernee Williams, got sixth overall.