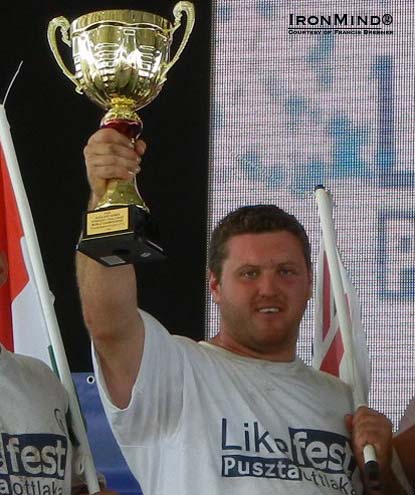 
Mike Miller (Canada) won the Braemar Stone with a put of 37’ 1/2”, with Janne Hartinkainen (Finland) coming in second and Csaba Meszaros (Hungary) getting third place.

Next was the 105-kg Mill Stone Press: Jonathan Kelly won by doing 5 reps within the 90-second time limit; Alexander Cortean was second and Csaba Meszaros was third.

Tossing the 16’ 6”, 105-lb. caber was the next challenge and Kelly repeated as the winner (also earning the 2012 IHGF World Amateur Caber Tossing Championships title in the process).  Michael Wohlrab (Australia) was second and Casaba Meszaros was third.

An Atlas Stone Carry wrapped up the first day’s competition and Janne Hartikainen “dominated this event with an incredible performance,” Francis Brebner reported to IronMind.  Tibor Kiss (Hungary) was second and Csaba Meszaros was third.

Day two opened with the 56-lb. weight for height, which was won by Csaba Meszaros (15’ 1-1/4”), with Kelly getting second place and Wohlrab third.

Kelly won the final event, and thus the contest.

Here are the official scores.

The IHGF’s Francis Brebner told IronMind that organizer Adam Darazs did an outstanding job and the support of Hungarian politicians George Shemonka and Gyula Budai was instrumental to the competition’s success:

“In all, the IHGF World Highland Games Strength Championships was a huge success—the athletes put up a great show which was filmed by Heni Oxygen Media Ltd and will aired in Europe within the next month.”