The IHGF held two competitions this past weekend in San Clemente, California and Francis Brebner called the action for IronMind. 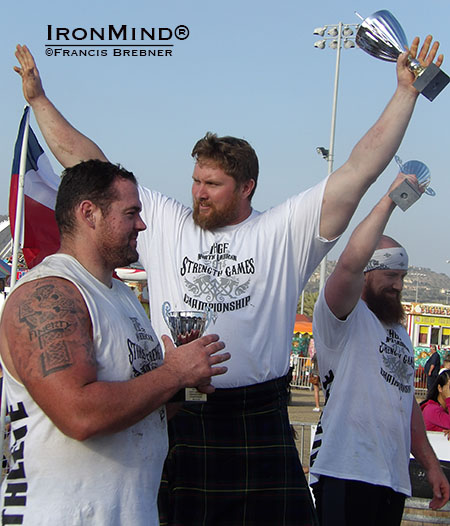 
It was a sweet victory for USA’s Casey Garrison this past weekend, who hoisted both the IHGF North American Stones of Strength and the IHGF North American Strength Games title. The two competitions were staged at the San Clemente Carnival Colossal, which is hosted by the Friends of San Clemente Beaches, Parks and Recreation Foundation and attracts an estimated twenty thousand spectators each year.

All athletes had their sights set on lifting the trophy for these championships, which secured the best American and Canadian strength athletes a place in the 2015 IHGF Stones of Strength World Championships and the IHGF World Strength Games Championships, to be held in Europe. Both events were filmed by Cox Cable and the programs will be aired closer to the Christmas season to over 1.5 million households in and around Orange County.

The first event of the Stones of Strength competition was the Husafell Stone Carry: athletes had to carry a massive 350-lb. stone as far as they could. Garrison made it look like a walk in the park, triumphing with a distance of 355’ 1”.  In second was Wechter with 325’ and in third, Burke with 280’.

In the Stone Medley, athletes carried the first stone, 250 lb. with a handle, a distance of 40’, dropped it past the line, and ran back for the heavier stone of 350 lb., with 60 sec. to complete the course in the fastest time possible. Garrison was on fire and speedily pulled off a time of 15.03 sec. for the win. In close second was Finerty with 15.44 sec. and in third, Boundy with 16.41 sec.

In the 165-lb. Stone Press, athletes had 60 sec. to complete as many reps as possible from the chest to above the head. Garrison seized this event as well but had to work for his total of 18 reps.  Finerty was second with 17 reps, and Burke and Sztajdocher tied for third with 16 reps each.

The following day, the IHGF North American Strength Games Championships had an energetic group looking to go head to head once again. Starting with the Farmer’s Walk, athletes carried 275 lb. in each hand, a combined weight of 550 lb., as far as possible. Haugen won with a distance of 202’ 10”, and close behind were Garrison with 200’ and Finerty with 198’ 10”.

In the Giant Dumbbell Press, athletes hoisted a range of dumbbells, 100, 125, 150, 175, and 200 lb., from the ground to overhead with 60 sec. to complete the task in the fastest time.  Now a familiar first, Garrison smoked the course, pressing all five implements in a record 41.57 sec.  Burke took second, just pipping Finerty by pressing four in 20.30 sec. to Finerty’s third place time of 20.75 sec., also doing four.

In the Car Deadlift, athletes lifted a one-ton car on a deadlift frame to lockout for as many reps as possible in 60 sec. First was Garrison with 26 reps, followed by Burke with 25 and Wechter with 24.

Both days of competition featured a fantastic group of strength athletes. Watch the IronMind News for more major IHGF events scheduled for 2015.