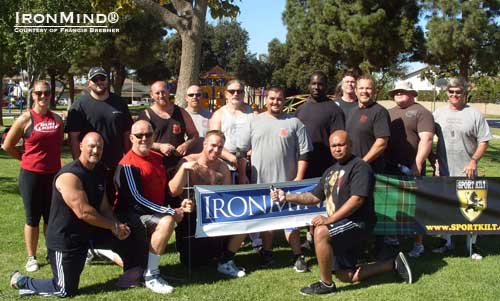 Francis Brebner (first row, left) organized a seminar followed by a Strength Games competition and the 2012 Orange County Rolling Thunder Championships, plus he helped referee an official attempt to close the Captains of Crush No. 3 gripper.  IronMind® | Photo courtesy of Francis Brebner.


“Athletes competed in a battery of tests which covered Stone Putting, Weight Throwing, Caber, Farmer's Walk, Log Lift, Atlas Stone Carry and then we finished off with the 2012 Orange Country Rolling Thunder Championships.  On hand was legendary strongman Odd Haugen, who officiated the strength events and also preformed a exhibition with the Rolling Thunderer with 246 lb.

"Scott Hutchinson set a personal best in the 28-lb. weight for distance (81' plus) and other highlights of the event were the Orange County Rolling Thunder Championships which was a very close battle between Jon Clark–Eklund and Mike Baltren, with the win going to Jon with a lift of 196 lb., and Dominic Martin successfully closing the Captains of Crush No. 3 gripper on his official attempt.

“On behalf of the IHGF and all the athletes, I would like to thank Teresa Hartel of Met-Rx for supporting this event, which was very much appreciated," Brebner said.