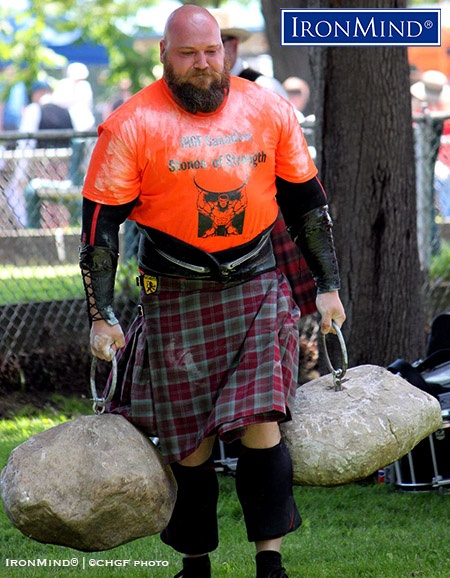 Brian Pennell on his way to victory in a hard-fought Dinnie Stones Walk at the 2018 IHGF Canadian Stones of Strength Championships. IronMind® | ©CHGF photo

The 2018 IHGF Canadian Stones of Strength recently took place at the 55th Cobourg Scottish Festival & Highland Games in Cobourg, Ontario, to large crowds. The contest was also a qualifier for the top Canadian to go to the 2019 IHGF Stones of Strength World Challenge in Fefor, Norway. Originally consisting of 10 athletes, the field was reduced to 6 as 4 athletes unfortunately pulled out with training injuries leading up to the competition; the contenders included Brian Pennell, R. J. Kayser, Andrew Roach, Zach Maguire, Josh Turner, and Sean Crowe.

In the Dinnie stone walk, athletes lifted two stones with rings attached and weighing 280 and 300 lb. for a combined weight of 580 lb. for max distance. With close results, Pennell just edged out his opponents with 19’ 7” for the win. Roach was second at 19’ and Maguire third at 18’ 8”.