Just in, IronMind® has received the official results from the semi-final round of the IFSA World Championships. 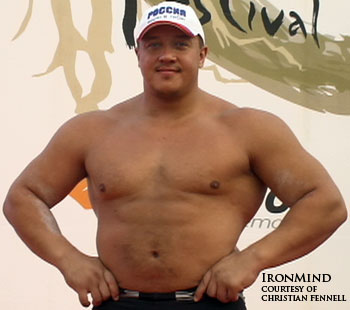 Don't call him an idle lat spreader: Michail Koklyaev won his heat in the semi-finals at the IFSA World Championships and has qualified for the finals. IronMind® | Photo courtesy of Christian Fennell.

"The top two from each heat move on to the finals, which will held on the 14th and 15th," IFSA Managing Director Christian Fennell told IronMind®.

"There were some surprises," Fennell said, "in a great competition that came down to the wire in some heats. The top-seven ranked IFSA athletes all made it," Fennell said, referring to Koklyaev, Blekaitus, Murumets, Virastyuk, Savickas, Brusokas and Szczepanki, "and two guys made it who have been close in the past," Hams and Katona, "plus the three Americans: Poundstone, Hatfield and McClure."

"Poundstone was on fire," Fennell said, also explaining that Ortmayer got knocked out of the finals when he lost his grip on the third sack in the last event, costing him precious time he could not afford to lose.

Asked about Savickas placing second in his heat, Fennell said, "He's a world champion and a smart man. The last two days were all about getting to the next two days."