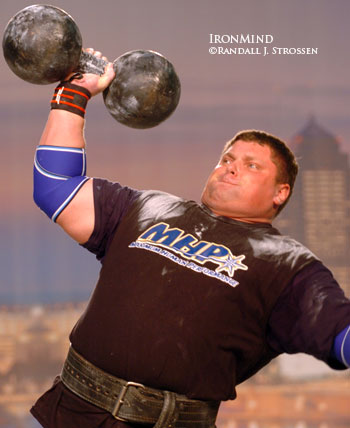 Zydrunas Savickas, who dominates the Arnold strongman contest, is the defending IFSA World Champion and has got to be favored to repeat in South Korea later this year. IronMind® | Randall J. Strossen, Ph.D. photo.

The first day will be the Korean Open, Fennell explained: "The top 10 Korean competitors will qualify for the IFSA Strongman World Open," which is the next day.

The semi-finals will have "four heats of six competitors," Fennell said, "with the top three from each heat qualifying for the Finals," which will be on September 14 and 15.

The IFSA Strongman 2007 World Championships are scheduled for September 9 - 15, in Geumsan, South Korea.