Asked what she would most like to see happen in strongman this year, the Ukrainian Strongman Federation's Olena Kiba said, "I want Vasyl [Virastyuk] to be number one in the world." 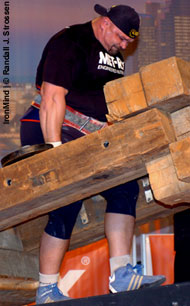 Virastyuk is considered one of the top competitors on the international strongman circuit, having won the prestigious World's Strongest Man contest in 2004, and he just proved himself again in the very different format of the Arnold Strongman contest, where he was second to Zydrunas Savickas.

Kiba, who manages Virastyuk, told IronMind® that the Ukrainian strongman star is currently training three to four hours a day, five days a week, and that his training is "very scientific" and involves "not just the iron," because, said Kiba, being a successful strongman requires such additional elements as working on flexibility, training the nervous system, etc.

Kiba also said that plans are moving forward for her "World's Strongest Nation" competition, which is scheduled for the end of July.