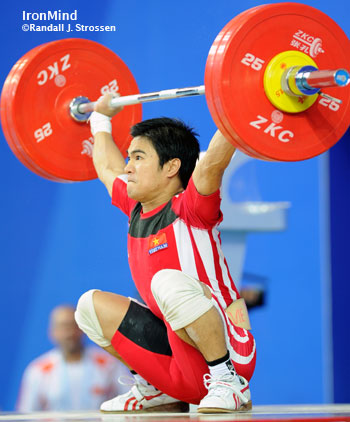 
After everyone else had finished in the snatch, Hoang Anh Tuan opened, ripping 122 with authority. He followed with two more good lifts, 125 and then 128 kg, for an 8-kg lead going into the clean and jerk.

Sergio Alvarez (Cuba) missed his opener in the clean and jerk, 151 kg, came back to make it, and then missed 155. Lu Jinbi (China) opened conservatively with 143 kg, missed 151 on his second attempt, but then went up 2 kg, to make 153 kg on his third attempt. Coming off his smooth performance in the snatch, Hoang Anh Tuan struggled in the jerk, missing his opener, 150 kg, bounced back to make it, before missing 154 on his third attempt.

Hoang Anh Tuan finished the evening with a 278-kg total, for the gold medal, with Lu Jinbi edging Sergio Alvarez on bodyweight for the silver medal, both tied at 271 kg.