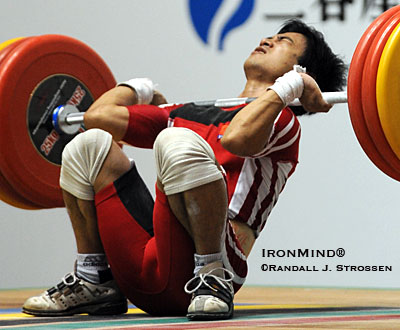 Hoang Anh Tuan (Vietnam) drew a collective gasp from the crowd when he went over backward with 155 kg on his third attempt clean and jerk, landing flat on his back with the bar over his throat. There was plenty of clearance, so Hoang Anh Tuan was fine - and he won the 56-kg title at the Asian Weightlifting Championships. IronMind® | Randall J. Strossen photo.

Hoang Anh Tuan had a relatively easy time winning the gold medal in the snatch, opening with a good 123-kg lift, missing 126 kg, and then coming back to make it. Hamizan Ibrahim Amirul (Malaysia) swept through three good lifts - 112, 117, 121 - for the silver medal in the snatch, proving once again that it's not where you start, but where you finish that counts. The powerhouse Chinese team had two lifters entered in this category, Cen Biao and Wu Jinbao: Cen Biao got off to a rugged start as he missed 120 kg twice, just not pulling the bar high enough to get under it, before making it on his third attempt. Wu Jinbiao also missed 120 kg on his opener, but he came back to make it, before missing 125 kg on his third attempt - he got it overhead, but it was turned down.

Hoang Anh Tuan's winning total (279 kg) was 10 kg ahead of what Bour and Mutlu hit at the European Weightlifting Championships two weeks ago, also showing why Hoang Anh Tuan is considered a favorite for the podium at the Beijing Olympics, and after winning last night, Hoang Anh Tuan told IronMind® that he hopes to do the same thing in Beijing.