American Highland Games professionals Sean Betz and Larry Brock were hot this weekend, with both men breaking field records at the Halkirk Highland Games in Scotland. 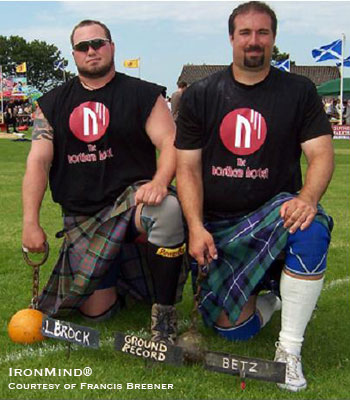 It was a smashing day at the Halkirk Highland Games this weekend—for records, that is. A crowd of several thousand spectators and cheering fans were entertained and thrilled by a fierce competition between Americans Sean Betz and Larry Brock and some of Scotland's finest: Bruce Aitkin, Alistair Gunn, and Murray Gunn.

In the 56-lb. weight for distance, Brock, who has been having a great season this year with the weights, established a new field record with a throw of 46' 11"; Betz was second with 43' 7" and Murray Gunn third with 37'.