Although an official statement from the IWF is expected shortly, widespread reports have been circulating that three-time Olympic gold medalist Halil Mutlu (Turkey) had tested positive for a banned substance at this year's European Weightlifting Championships. 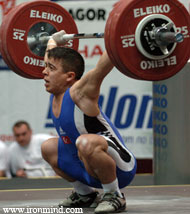 Now, it is also being widely reported that Mutlu's B-sample was positive, and IronMind® was told that today European TV broadcast that Mutlu has been suspended for two years, which is consistent with a first-time offense under the IWF anti-doping policy.