“A picture of the top three in the 'King of Stones' competition and it was certainly a day for the giants,” Colin Bryce reported to IronMind from the 2013 Commerce World’s Strongest Man contest. 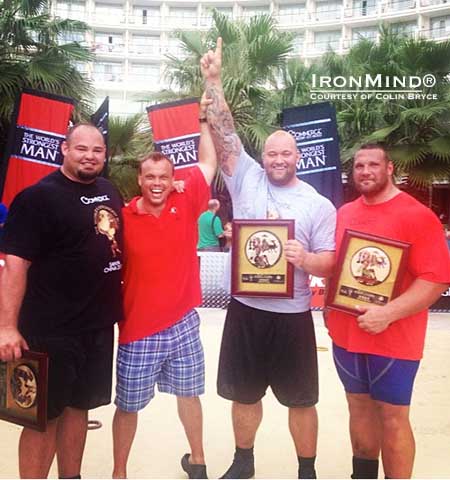 
“The 6 foot 9 inch Hafthor Bjornsson, who is the returning champion after Brian Shaw didn't put his full efforts in in 2012, took the win in just over 21 seconds. The set of stones was from 130kg to 185kg.

“When the dust settled, Terry Hollands was in third, Brian Shaw in second and Hafthor Bjornsson in first. The top two were within half a second of each other. To be fair to Brian Shaw, he made a stumble early on which cost him the title. Brian took the loss in good spirits saying he would revenge the loss in the final.   “Looking at Brian's form in the heats he is still one of the main favourites for winning. In fact all three of these men have made the final and look in top shape,” said Bryce.