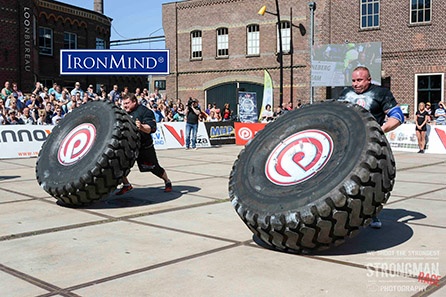 Grzegorz Szymanski and Zydrunas Savickas go head-to-head during the tire flip at SCL Holland. At the end of the day, Szymanski won three out of the six events. IronMind® | Photo courtesy of Aryn Lockhart/Strongman Rage

While the seven most powerful countries were gathering for the G7 conference in Germany, Holland was hosting 12 different countries with 14 of the strongest men in the world for the second stage of the MHP Strongman Champions League. After a night of heavy storms, the weather cleared with 25 degrees for the perfect battlefield in the quaint town of Ulft.

Six events were center stage. Krzysztof Radzikowski was competing in his nationals in Poland, which meant J-F Caron was wearing the MHP leader shirt.

Without any hesitation, the day started off big with the log lift for max. As each athlete worked their way up, Grzegorz Szymanski trailed behind Zydrunas Savickas with 190 kg. After the second lift, Savickas was in the lead with an easy 210-kg lift. The rumor was Big Z wanted to try for another world record. He had just successfully completed his last world record in Brazil only a week prior for 228 kg. With the log locked and loaded, Big Z took his position. As he pulled it to his chest, it just was not meant to be. The record would have to wait for another day. The event completed with Savickas winning the event at 210 kg, Szymanski at 190 kg and Ervin Katona and Dainis Zagaris tied for third with 185 kg.

The second event was an 18 ton truck pull for 24meters. The course had a slight incline in the last 8-10 meters which left a lot of athletes giving maximum effort and leaving them completely worn out after the event. Despite his massive size, Savickas won this event with Szymanski in second and Alex Moonen taking third.

Event three was the tire flip. Each athlete was required to flip the 420-kg tire seven times. Bjorn Solvang had perfect rhythm for this event and took an impressive third. Savickas and Szymanski battled head to head. Each flip occurred simultaneously. It was only in the last fraction of a second that Savickas’ tire fell to the ground first.

The fourth event was the conan’s wheel with the weight of 330 kg. Athletes took their position and immediately the weight crushed upon them limiting their breathing as they made each rotation. Szymanski  won this event with Dainis Zagaris taking second. “This was my favorite event,” Szymanski stated at the end of the day.

Event five was the 430-kg yoke for 20 meters. Szymanski won this event ahead of Savickas and J-F Caron who took third.

The final event of the day was the stones. Szymanski went into the event with a slight lead over Savickas. The balls weighing from 120-180 kg varied in weight and were loaded at different heights. The winner would be determined by the results of this event. Szymanski won the event solidifying his win for the day with Zagaris taking second and Caron third. Savickas ran out of tacky by the final ball and it slipped several times before he was able to complete the course.

J-F Caron was thrilled to have the leader shirt and after the day with his fourth place finish, he acquired enough points to be the current SCL Leader. “I competed well, but I was disappointed in the stones at the end. I am too slow. I must go faster,” Caron stated.

Szymanski took hist first SCL win in Holland. Last year he placed second. When I asked if he thought he could win, his response, “No. I didn’t expect to be able to win. I am very surprised.” He went on to thank the organizers stating that on every level the competition was great.

Jarno Hams and Ervin Katona were also honored as they competed in their last SCL Holland. Hams was the top Holland athlete for the day and is preparing for his nationals where he hopes to take the 8th title as Holland’s strongest man.

Next week the drama continues for the MHP Strongman Champions League in Finland. Undoubtedly this will be an intense battle for two days with Savickas, Thor Bjornsson, and Kzysztof Radzikowski returning to the field. The season is just warming up.