Inverness, Scotland - At times, it looked like the California Highland Games Championships - with representatives among the athletes, officials and the press - but in the end, it was a Scot who prevailed, as Gregor Edmunds took home the title. 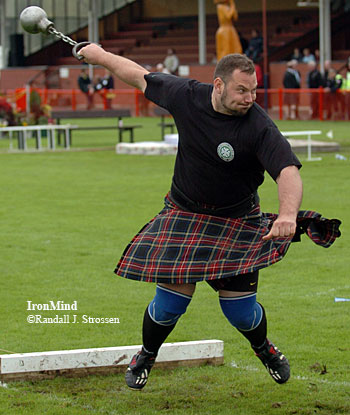 Never winning an event, but by being steady, Edmunds overtook defending five-time World Champion Ryan Vierra. Among his placings Edmunds was second in two events (16-pound open stone and the 28-pound weight for distance), and third in another three (Braemar/Inverness stone, 22-pound hammer, caber).

Edmunds finished with 29.5 points, Vierra was second, with 34 points, and Larry Brock took third, with 39 points.