On June 8, Graham Hicks contacted IronMind, asking whether we might know what the British Log Lift record might be for under 105-kg strongman, modestly saying in a further email on the subject, “There are a couple of guys who have the ability if all is well on the day.” 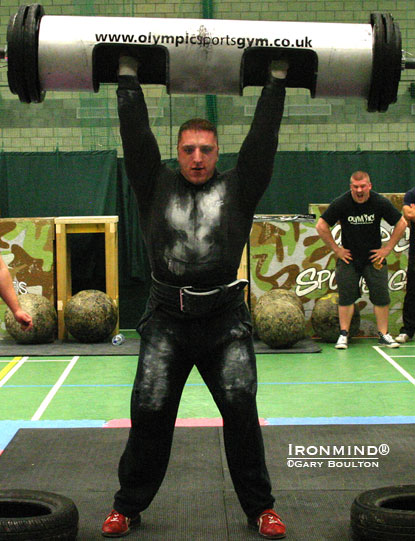 
The day was less than three weeks later, and the man of the hour was Graham Hicks, himself, as he pounded up 170 kg.

“Please find attached a picture of Graham Hicks (taken by Gary Boulton) successfully lifting a 170-kg. log at England's Strongest Man u105kg, June 26th 2011, Salt Ayre Sports Centre, Lancaster. This is an official u105-kg British record and we believe it may be also be a World Record at u105kg.

“Graham (aka Hixxy) of Morecambe, Lancashire, went on to win the competition with five event wins from seven in only his second year competing.

“Video of the lift linked here.

“I hope you are able to share this feat of strength with our strongman contemporaries across the globe.  As you can see from the video it looks as if there is more to come from Graham and I hope he would be considered worthy of an invite to future international log lifting championships.”

IronMind would like to add its congratulations to Graham Hicks on this huge performance, and our thanks to Charis Louca for working to get Graham’s lift the international acclaim it deserves.