“The IceMan Challenge II which is first SCL 2011 event, will gather good lineup to Arctic Circle,” Strongman Champions League co-founder Ilkka Kinnunen told IronMind today - understating that the card is headed by none other than Mr. Everything in strongman, Zydrunas Savickas. 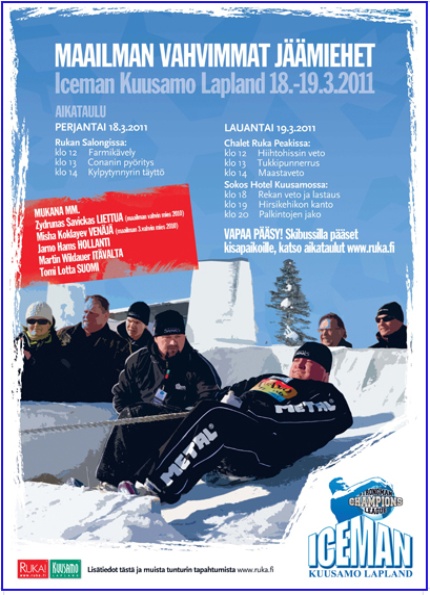 Strongman goes Arctic, thanks to the creativity of SCL which introduced the IceMan Challenge in 2010 and will use this spectacular setting to kick off its 2011 season.  IronMind® | Courtesy of SCL.


“Thirteen athletes around the world will compete not only for heavy events, but also against cold weather. There will be no temperature limits when athletes hits to real action,” read Kinnunen’s statement.

"This is a two-day competitio, beginning on March 18, Ruka Salong:

In the evening two last events will be done in Sokos Hotel Kuusamo, which is also official IceMan hotel during the competition.