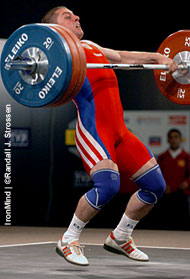 Krzysztof Szramiak (Poland) got the ball rolling tonight by making a good opening snatch with 155 kg, Georgi Markhov (Bulgaria) missed the same weight on his first attempt, but came back to make it on his second attempt, and Vladislav Lukanin (Russia), who had made a good 152 on his opener, missed 156 on his second attempt and again on his third attempt. Szramiak, who is squarely solid and muscular looking, made a nice deep snatch with 158 on his second attempt, followed by Markhov's successful 159. Davtyan made a nice 160 on his first attempt, and then Szramiak missed the same weight. With the last two snatches, Davtyan made a nice 163, followed by a solid 165.

Of the leaders, Markhov opened first in the clean and jerk, with a good 185, and Szramiak got himself on the board with 187. Davtyan opened with a good 190 and his teammate Ara Khachatryan made 191 on his second attempt - his knees came way in with the effort it took him to stand up with the weight and they did the same thing when he power jerked it. Markhov made 192 on his second attempt and waved to the bar as if to say, "that's nothing," and Szramiak followed Markhov's lead, making the weight and making no secret of his satisfaction with the lift. Markhov only pulled his third attempt 194 and was clearly unhappy with himself about it. Enter Lukanin now - who looks like he should be working for Bill Gates rather than lifting weights - and he blew up the 195-kg jerk, but he also sent it right over his head for no lift. Davtyan made the same weight on his second attempt, and Lukanin, who comes right over to the bar and starts his lift almost instantaneously, punched it overhead with authority. Szramiak appeared to have the same 195 in the bag, but he lost control of the bar when it was overhead and there went the lift. Ivan Stoitsov (Bulgaria), who had made a very strong 190 on his first attempt, called for 200, going for gold medal position in the jerk, and after having to do some work on the clean, he missed the jerk. Davtyan also missed the jerk on 200, but then Lukanin, once again wasting no time, got the bar going and made a great lift with the same weight. Stoitsov had one attempt left and he wanted the gold medal in the jerk, so he took 201, got the bar overhead, seemed to have a good lift and then the right end of the bar started to tilt down dramatically as it came crashing down. Davtyan finished with 360, followed by Lukanin at 352, Markhov at 351 and Szramiak at 350.

Even as an opener in the clean and jerk, you usually expect more than just bodyweight on the bar at a continental weightlifting championship. But if you're talking women's weightlifting and the lifter weighs 152 kg, you're on the way to big things, and that's the story on Olha Korobka (Ukraine) at the European Weightlifting Championships today. After snatching 121 and 126, before missing 133, Korobka followed her first clean and jerk with two more good lifts, 160 and 164, to sweep the gold medals in the women's +75-kg category with a total of 290 kg and her 164 was a new European jerk record. Weighing a mere 89 kg and change, Natalie Gagarina (Russia) finished second, with a total of 271 kg.