If you're strong, you're good at lifting a lot of weight overhead and this month, three-time USA Olympic weightlifting team coach Jim Schmitz helps you in this quest by introducing the push press and power jerk. 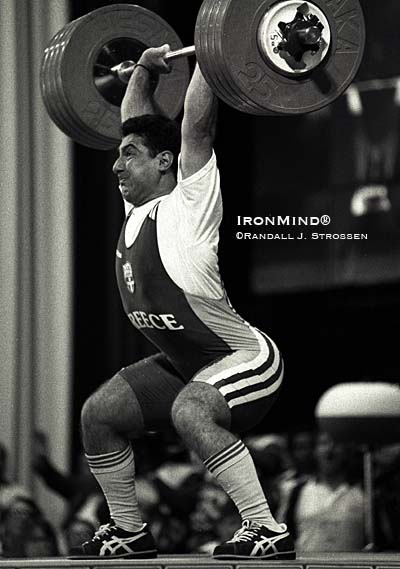 Known for his power jerks, Akakios Kakiasvilis (nee Kakhi Kakhiashvili) had already edged out Anatoli Khrapati on bodyweight for the gold medal in the 99-kg class at the Atlanta Olympics, but nonetheless, he called for 235 kg - not because he needed to lift it, but because he could. IronMind® | Randall J. Strossen photo.

There was a time when these lifts were the special province of competitive weightlifters, throwers and all-around strong guys, but Jesse Marunde introduced the technique in strongman competitions, so now the power jerk has become an increasingly common way to get a big weight overhead.

Most important, the power jerk is a way for someone who might not have the strongest shoulders and triceps in the room to end up with the biggest weight overhead, since it teaches you how to effectively use the much larger muscles in your legs and hips to drive up the bar.