“Hope this message will find you in good health. Just wanted to inform you about our last achievements in strength sports,” Georgian Strongman Federation Vice President and Co-Founder Valeri Gulbani reported to IronMind today. 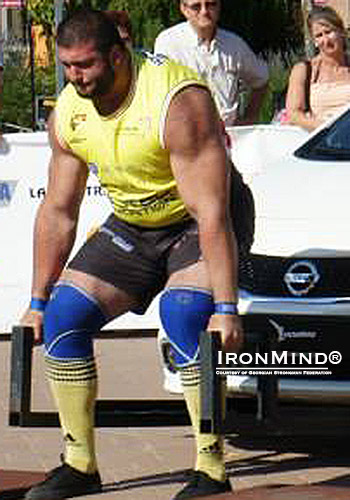 “Another member of Georgian Strongman Federation, Georgian and world record holder in the bench press in the 125-kg category participated for the first time in "Battle of Champions" Russia, Arkhangelsk. He was 4th and improved his own record (275.5 kg ) with a new record of 282.5 kg. Unfortunately, his last attempt to lift 287.5 kg was not done well done enough.

“The Georgian Strongmen Federation is proud on behalf of our athletes to be able show such high performance and is dedicated to go for medals in both competitions for the next time. This is just a start to unleash the GEORGIAN POWER! :) ."

Giants Live Director Colin Bryce told IronMind, "The top three men in each contest qualify for World's Strongest Man and we are seeing some brilliant new talent.  Konstantine Janashia was an impressive young man and he would be a very likely wildcard when the time comes around to choose the competitors for next year's World's Strongest Man contest."