"Franz Beil won his first international competition," said World Strongman Cup manager Martin Muhr, in what was described as a, "hard fight between him and Ralf Ber." 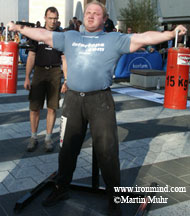 Set in Nuernberg, Germany, the contest left Muhr gushing: "Great weather, a perfect crowd of about 2500, and a German win in Germany!"

Final places and points are:

Several of the athletes from this contest will be leaving this week, to compete in the upcoming World's Strongest Man contest, Muhr said.