"I do salute the attitude of Christian Fennell," Fortissimus 2008 Chairman Paul Ohl said in a statement released to IronMind®, referring to the IFSA Managing Director's openness to a potential invitation that was reported here earlier today. 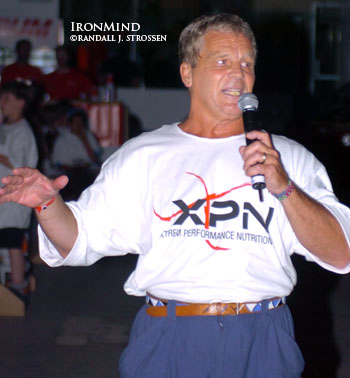 Paul Ohl introduces the back lift at the 2004 World Muscle Power Championships in Dolbeau-Mistassini (Quebec, Canada). Paul Ohl most likely is the world's leading expert on the great Louis Cyr and by virtue of this, he is also uncommonly familiar with the back lift. IronMind® | Randall J. Strossen, Ph.D. photo.

"And I would like to recognize the fact that the IFSA World Championships, held in Quebec City in 2005 was, in fact, the highest-prized strongman contest ever, in Canada. I will however remind Mr. Fennell that I was the man who negotiated that amount of money at first hand, bringing a consensus to both parties and making sure that the athletes would be, once and for all, treated the way they had always deserved to be.  I defended other principles with lesser success and this was, back then, the reason why I stepped down. Yet, I will state that the US $50,000 in prize money announced for FORTISSIMUS 2008, is the highest amount ever guaranteed for a competition in Canada, other than WSM and IFSA Worlds.

As for FORTISSIMUS 2008, I made sure, before getting involved, that there would be no feud, nothing that would impair that sport and its athletes. Our organization boasts the values that had inspired Louis Cyr more than a century ago. And we will stand by that.

FORTISSIMUS 2008 is very much open to an all-out competition for the FORTISSIMUS trophy. As any sport should be. This was the way showed by Louis Cyr and this is the way the torch should be borne on today."