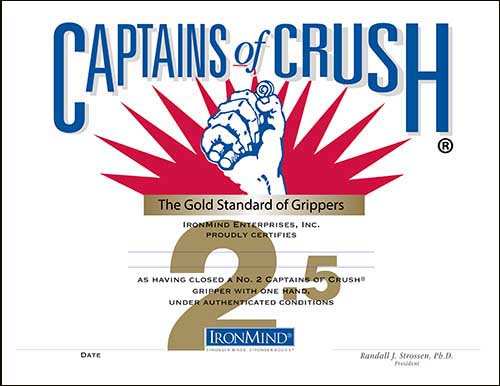 
Gripper certifications began in 1991 when IronMind created a program to recognize men who officially closed its fearsome No. 3 gripper, the universal symbol of world-class grip strength—with grip strength legends Richard Sorin and John Brookfield being the first two men to achieve this distinction.

As the No. 3.5 and No. 4 grippers were added to the Captains of Crush® Gripper family, certifications on them joined the No. 3, and then in 2011, IronMind took the next step by creating  a certification program for women on the Captains of Crush No. 2 gripper.  Highland Games star Adriane Wilson was the first women to achieve this honor, and now both Elizabeth Horne and Amy Wattles have done likewise, so IronMind feels it’s time to present the next challenge.