"The thing is with Fe, he doesn't push himself," Denny said of her husband, Mark Felix, who just pulled 292 pounds on the Rolling Thunder®, and very casually at that. 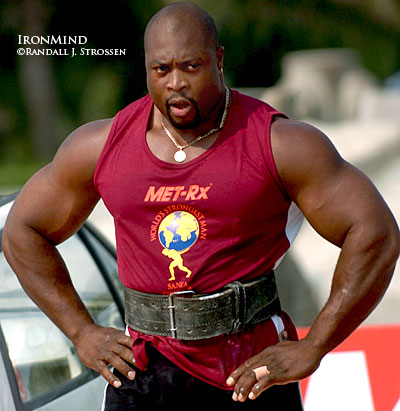 Mark Felix catches his breath after the car deadlift at the 2006 World's Strongest Man contest, where he and Mariusz Pudzianowski tied for first place on the event. Randall J. Strossen, Ph.D. photo.

Mark Felix has already done some very impressive things in the strength world, but what is unfolding as he attacks the Rolling Thunder® is that he is on the verge of taking the lift to a new level, although it will be interesting to see how some of the world's other top performers on this very popular test of grip strength - such as Laine Snook and Magnus Samuelsson - might be responding to Mark Felix's huge training lifts.

Denny Felix has made it clear that Mark's extremely impressive performances to date have not tapped out his potential on this lift, emphasizing how unassuming her husband has been with his gym lifts that have been in excess of the Rolling Thunder® world record.

"Right now he has only been doing it a couple of times and just slotting it in on the ends of his training session," Denny reported to IronMind.