Making another piece of strongman history, FORTISSIMUS has won the 2009 Pleiades Award of Excellence, the first time Canada has so honored strongman. 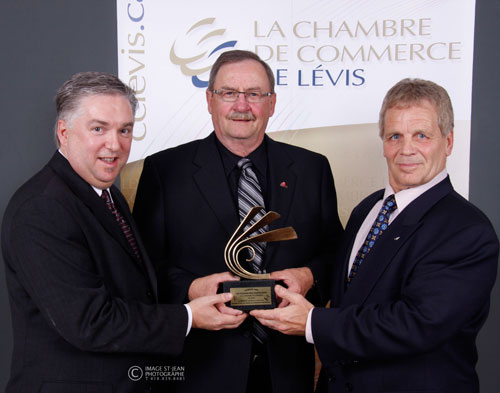 (left to right) Jean-Pierre Bernier (sponsor from Ultramar), Marcel Catellier (chairman of the FORTISSIMUS board of director) and Paul Ohl (president of FORTISSIMUS 2009) accept the Pleiades award.  IronMind® | Image courtesy of the Board of Trade of Lévis.

Following is the official statement released by FORTISSIMUS:

Selected in March as a finalist amongst a strong field of valued cultural and sport-promoting organisms such as the Québec International Marathon, the Lévis Symphonic Orchestra and the Lévis International Jazz Festival, FORTISSIMUS got top honors at the annual prize-awarding gala sponsored by the Board of Trade of Lévis.

With more than 800 in attendance from political, business, cultural and social horizons, FORTISSIMUS won the 2009 PLEIADES AWARD OF EXCELLENCE, rewarding the creative and promotion efforts of the group that brought Fortissimus international recognition.

"This award belongs to the volunteers who gave birth to FORTISSIMUS in 2008," said Marcel  Catellier, Chairman of the Board of Directors.  "Our task is now to make it worthy of the reputation it has earned since."

"We owe much of this highly-valued reward to the world-class strength athletes who stood by us in 2008, to IronMind who supported our concept from the beginning and to Mayor Carl Dubé's dream," commented Paul Ohl, president of FORTISSIMUS.
"Back in November 2007, Derek Poundstone's given word became for us the key to building up the first edition.  And when Zydrunas Savickas accepted the challenge, we knew that we had something of a kind going for us.  I want them to know that they have earned a part of this award," added Paul Ohl.

It is the first time ever that a corporation promoting the sport of strongman wins such a prize in Canada.