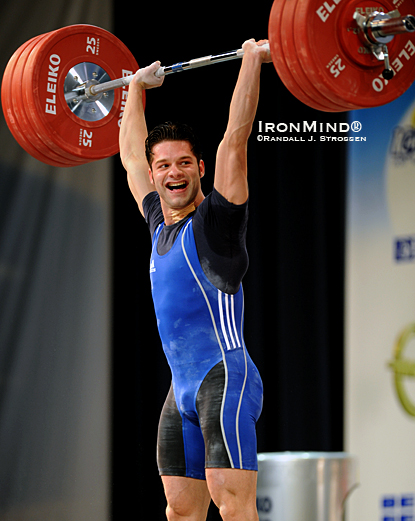 
Miculescu finished the snatches with a 4-kg lead over Mete Binay (Turkey) and a 5-kg lead over Mikhail Gobeev (Russia).  Binay quickly fell further behind when he cleaned and jerked 160 kg, missed 165 kg and then came back to make that weight.  Alexandru Spac (Moldavia) got the bronze medal in the jerk with 168, but the other big story in this class—besides Ninel Miculescu—was the performance of Mikhail Gobeev, who has only been in the sport four years, but is already showing his talent.

After making 171 kg on his first attempt clean and jerk, Gobeev waited for Miculescu to finish, and then came out for 181 kg on his second attempt, looking for the gold medal in the clean and jerk.  It would have been a dramatic success, especially because Gobeev and Miculescu were equal in bodyweight, but all Gobeev did was a pull, and then he passed on his third attempt.