SCL introduced its strongman show in the Canary Islands, where “the 8th stage of SCL turned out in a great success, with perfect weather and a great atmosphere by the 3,000 Spanish people who were watching the stage,” Marcel Mostert reported to IronMind. 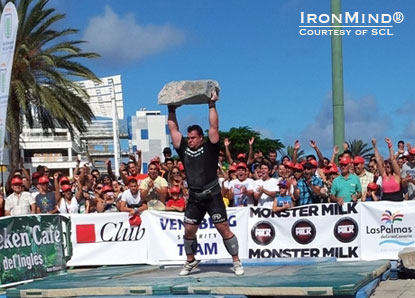 Jarno Hams is returning from an injury earlier this year and is reestablishing himself in the strongman ranks.  IronMind® | Courtesy of SCL.


“The first 2 events—truck pull and rock lift—where won by Jarno Hams.  The Dutch man came back from an injury this year, but proved to be back with an outstanding rock lift with a natural stone of 135 kg.  After Ervin Katona and Jimmy Laureys did the 125-kg stone, Jarno was the only one who could make the 135 kg.

“Still, Ervin was not defeated and came back in the next events: the wheel flip, and a great the Monster Milk forward hold, where he had a great win.

“With a keg loading event at the end (8 kegs of 75 kg on a 1.60 m platform), an exhausted Ervin Katona took the overall win.

“It was just a pity that the Spanish Champion, Juan Carlos Heredia had to stop after 3 events with a small bicep injury.  Still, he stole the hearts of the Spanish audience,” said Mostert.

“Because of the success and large media coverage, the SCL signed directly a three-years deal with the organization board in the Canary Islands, and we we thank the government of Las Palmas and the enthusiasm of  the people there around us,” Mostert said.  “We will be back in 2012.”

Mostert said this competition will be broadcast on Eurosport on September 20, as well as on Canary Islands TV.

Next up for SCL is a contest in Kosice, Slovakia this coming weekend, but the current leader, Ervin Katona, will not be in the lineup as he will be preparing for the World’s Strongest Man contest, Mostert said.