Aryn Lockhart was ringside for SCL Croatia and called the action for IronMind. 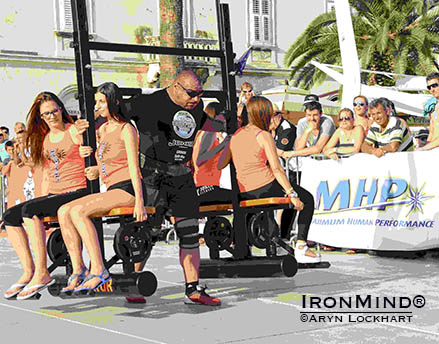 Ervin Katona completes the 430kg yoke with four ladies along for the ride. Katona wins the MHP Strongman Champions League in Croatia to take back the leader shirt with a one point lead in the overall standings. IronMind® | ©Aryn Lockhart

The roller coaster that is MHP Strongman Champions League was in full swing this weekend for stage eight in Split, Croatia. In the ongoing battle over the coveted leader shirt, the day was filled with head to head battles in another down-to-the-wire competition.  Battling intense heat of 36 degrees over the course of six events, athletes struggled to stay hydrated and in top form for each event. Despite winning three of the six events, Martin Wildauer, took second for the day two points behind Ervin Katona. Katona won the competition without winning a single event, but placing consistently high.  Katona’s win places the leader shirt back in his hands by the narrowest of margins. He currently holds a one point lead in the overall standings.

“The events went very well for me today. In the last competition in Portugal, I had an injury and ripped the skin off my hands. This week, I am injury free and everything worked,” stated Katona.

The competition took place on the harbor RIVA in beautiful, downtown Split. With thousands of spectators, it was a picturesque backdrop for 11 world-class strength athletes. Split also saw the return of Krzysztof Radzikowski after a two-month absence due to a tricep injury.  Despite his absence, he placed an impressive third overall for the day. He too is in the hunt for the leader shirt and plans to make significant ground in the remaining stages ahead. With a smile he stated, “There are still a lot of competitions left.”

The first event for the day was the boat pull. Taking advantage of the perfect location, athletes pulled a boat towards the harbor challenged by both a thick and wet rope, hand over hand. The boat weighed 18,000 kg. Despite the wind and the waves of the sea, it worked out all well because of the perfect skills from Ilkka Kinnunen and Marcel Mostert who did do these events before in their competitions. Dainis Zagaris, who  celebrated his birthday on competition day, started off on the right foot with a win in this event.

Event two was a 150kg log for reps. Two athletes were pitted against one another. In amazing form both Dainis Zagaris and Matjaž Belšak, tied for the win with seven reps.

The third event was the frame carry. Using the same frame from Serbia, the grip was particularly challenging leaving a few victims with torn hands and unable to finish the event. Martin Wildauer, however, moved with ease taking first with only 18.97 seconds.

The forward hold had a surprise winner with Simon Johnston taking the win with an amazing 45.88 seconds.

The fifth event was the 430kg yoke with four women on each side. Barreling down the 20m course, Martin Wildauer completed this event with an impressive 12.03 seconds running past the finish line to place the ladies down gently.

The final event of the day was the car deadlift with 360kg. The Strongman Champions League has resulted in numerous down-to-the-wire competitions and Croatia was no different. Again down to the very last event, Martin Wildauer and Ervin Katona were head to head.  Each athlete was carefully strategizing and reviewing results after each event. Wildauer known for this strength in deadlifts knew he needed the win, but he also needed Katona to place lower in the field.  With a fist pump and the brotherhood of competition, they both set out to make their mark.  The crowd was on the edge of their seats waiting to see who could emerge the winner.  With the final whistle blown, it was Wildauer who won the event with eight reps, but Katona’s six reps were enough to tie for third place and enough points to take the competition.

The next stage of the MHP Strongman Champions League is on 3 August in Poland. It’s likely this roller coaster will not have an end until the finals in Malaysia 8 and 9 November. The athletes will take a week’s rest and come back ready for battle. The heat is on and these athletes are in hot pursuit of the leader shirt.