Eric Frasure has had a standout year and he didn't disappoint his fans as he wrapped up his 2008 Highland Games season with another big win - Francis Brebner calls the action for IronMind® from Mississippi Gulf Coast Highland Games and State Championships. 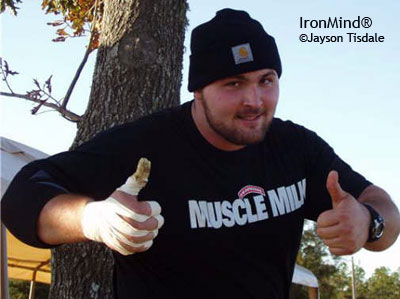 With a crowd of 15,000 spectators and a beautiful day of sunshine, Eric Frasure finished off his Games season on a high, clearing 19' in the weight over the bar in his third Games in succession and also setting several new field records.

In the opening event of the State Championships, the Braemar stone putt, Chris Chafin claimed the first win over Frasure, with a putt of 38' 1", with Frasure in second at 35' 5" and David Little in third at 33' 3".

Frasure took advantage of his three extra attempts and established a new field record of 48' 1-1/2".

In the 56-lb. weight for distance, surprisingly it was Chafin with a throw of 39' 1-1/2" who took the win over Frasure, who, after having two fouls, played it safe by taking only one turn to keep from fouling again and produced a great distance of 38' 9". In third was Kearny Smith at 33' 9".

The caber event was a home run, you could say, for Frasure, who was the only athlete to turn this 125-lb. and 20' long beast, with an 11 o'clock winning toss; Chafin was second with a 75-degree attempt and Smith was third with 65 degrees.

In the sheaf toss, Frasure thrilled the crowds by tossing the sheaf a winning height of 30'; in second was Smith with 28' and in third was Chafin with 22'.

In the last event of the competition, Frasure again surprised us by tossing the 56-lb. weight over the bar 19' for his third Games in succession; Chafin was in second with 17' and Smith in third with 15'.

Frasure said that this was a great end to his Games season, establishing several field records, and was very happy once again throwing the 56-lb. weight over the bar a height of 19'; he gave credit to his strength coaches, Mike Yartin and Mike Golden: "These guys know their stuff. Next season should be interesting."