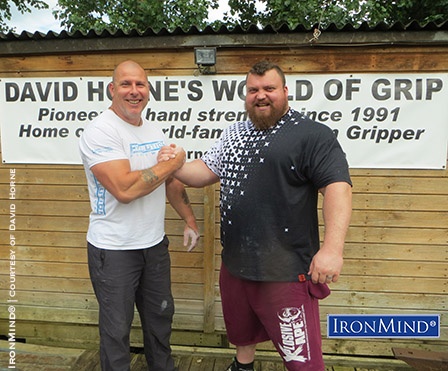 “Quick picture from yesterday’s visit from Eddie,” GripWorld’s David Horne (left) told IronMind today. Eddie Hall (right) is a powerhouse who wants to win this year’s World’s Strongest Man contest, and in the run-up to the contest, he’s focussing on his grip, with help from David Horne, a leading expert and competitor in the world of grip strength. IronMind® | Photo courtesy of David Horne

He’s been rocking the strongman world with huge performances, but don’t think England’s Eddie Hall is taking the small stuff for granted: as part of his game plan to win World’s Strongest Man 2016, Eddie is tuning up his grip strength under the able guidance of David Horne.

“We had a good chat, and [Eddie] has learned some things that he hadn’t thought of before," David Horne told IronMind today.  "I will now be training his grip for the next two weeks on Tue and Thu. There’s not really a lot of strength he can gain in that period, but safely I will be showing him ways to improve the areas I think will help him greatly over time.

“He is very professional about his training and wants to win the WSM. He is a nice bloke, but boy is he huge!,” said Horne.