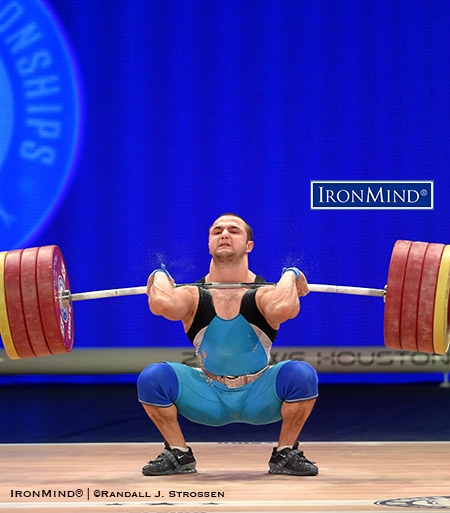 After he had secured the gold medal in the clean and jerk, as well as in the total, in the men’s 77-kg category at the 2015 IWF World Championships, Nijat Rahimov (Kazakhstan) called for a world record attempt of 211 kg. He racked the bar, but could not stand up with it. IronMind® | ©Randall J. Strossen

The men’s 77-kg category uncorked its first surprise before the A group had even begun lifting because Azerbaijan’s Elkhan Aligulizada cleaned and jerked a whopping 203 kg, for a new junior world record, setting a standard that was going to challenge the A session competitors.

The next big surprise was Tigran Martirosyan (Armenia) bombing out in the snatch, which made it look like things would only be that much easier for Lu Xiaojun to sweep the class. The Chinese lifter won the snatch with 175 kg, missed a world record attempt with 177, and appeared poised for from an easy win and possible world record attempt in the clean and jerk, but things don’t always go according to plan: Lu cleaned 201 kg three times, but he missed the jerk each time.

And that 203-kg lift made by Elkhan Aligulizada in the B session? When the dust had settled, it proved to be good for the silver medal in the clean and jerk.