Without missing a beat, Svend Karlsen moved from competing to his new role in strongman - and at the WSMSS Moscow Grand Prix, Karlsen did double duty, assisting with both the refereeing and the presenting. 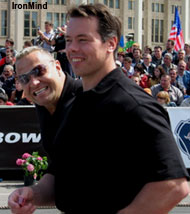 WSMSS Tour Director Jesper Albanson told IronMind® how pleased everyone from World Class Events was to see Svend's career in strongman continue in this way, and The Viking won praise for assistance to Colin Bryce as a presenter, as well as for his support of Jouko Ahola as a referee.

"WSMSS Moscow was great," Colin Bryce said, "and we are looking forward to Poland on August 12th. With Jarek [Dymek] in such good shape it could be a Polish 1 and 2 on home soil." Still, don't just forward as you place your bets, because as Bryce explained, "We are lining up an amazing field of athletes, including Raivis Vidzis and Tarmo Mitt, and assuming Jesse [Marunde] doesn't run into flight difficulties (which happened in Moscow), then he will be there of course!!!" 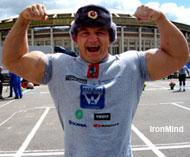