It was a big day for the Americans as Jesse Marunde wasted no time winning the lead-off event at the 2005 MET-Rx World's Strongest Man contest today, and his compatriot Don Pope's consistency put him in first place overall at the end of the first day of competition. 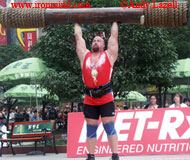 Don Pope, on the Log Lift during the qualifiers at the 2005 MET-Rx World's Strongest Man contest, is in first place overall after the first day of the finals. IronMind® | Photo courtesy of Andy Lazell.

Here are the results from day one of the of the 2005 WSM finals:

Tomorrow's events are the Overhead Log Lift for reps and the Fridge Carry, and the excitement is already building for what is certain to be another day when anything could happen.