Lignano Sabbiadoro, Italy - Don't tell Dmitry Berestov (Russia) about having to make a lot of attempts if he expects to win: It took him three tries to make his opening snatch and the same thing happened in the clean and jerk, but for those two lifts, he pocketed the gold medal in the snatch and in the total, along with the bronze medal in the clean and jerk in the 105-kg category at the European Weightlifting Championships.. 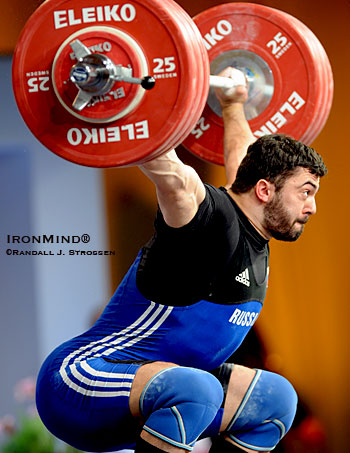 The third time was the charm for Berestov as he missed 190 kg twice in the snatch, before making it look light on his third attempt.

Ramunas Vysniauskas (Lithuania) came into the snatch five kilos down on the leader, but he was the lighter man, so the door was open for him to make up some ground.

Vysniauskus missed the clean on his opening clean and jerk, 220 kg, but came back for what looked like a nice lift on his second attempt - initially declared a good lift, the jury overruled it, although there were some differing accounts of what exactly had been wrong with the lift. Vysniauskus seemed to take it in stride and he seized the opportunity to celebrate getting the bar overhead again when he made a(nother) good lift with 220 kg on his third attempt - good for the gold medal in the clean and jerk and a silver medal in the total.