“There were some great battles throughout the day with the fight for a podium finish,” Bill Lyndon told IronMind®, as Derek Boyer handily won the 2010 Australia’s Strongest Man contest, and Marc Wells and Eben LeRoux battled it out for second and third place, respectively. 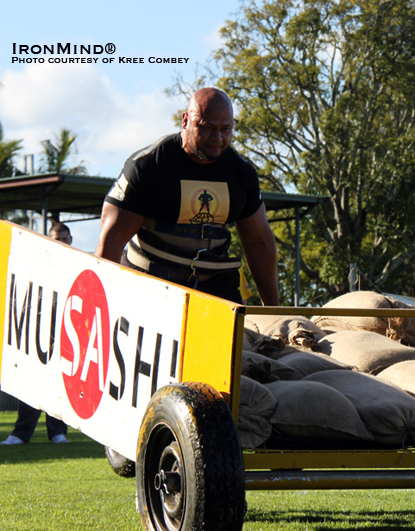 Derek Boyer, who is about to turn 41, won the 2010 Australia’s Strongest Man contest.  IronMind® | Photo courtesy of Kree Combey.


Derek Boyer turns 41 next week, Bill Lyndon said, but “he is still not showing signs of slowing down.”  Boyer won five of the six events, delivering what Lyndon described as “a solid and always entertaining performance.”

Here are final places and points for the top three:

“Mark Wells’s very hard work paid off with a gritty fight back to secure second place after some errors in the first two events to cement automatic entry in next year's World Amateur Strongman
Championships via our agreement with the ASC and The Federation of Australian Strength Competitors,” Lyndon said.

“The next major event for Australia is the staging of The Southern Hemisphere’s Strongest Man, showcasing athletes from the nations south of the equator.  This will take place later this year with the top three from Australia’s Strongest Man progressing through along with athletes from South Africa, New Zealand and Argentina and Asia.”