When Australian strongman Derek Boyer broke “the Guinness world record for the fastest 20-meter [Yoke] carrying 300 kg on his shoulders (actual weight, 310 kg)” last weekend with a time of 6.88 seconds, IronMind invited Bill Lyndon from the Federation of Australian Strength Competitors to give IronMind News readers an update on Derek, who will be on his way to the 2011 MET-Rx World’s Strongest Man contest next week. 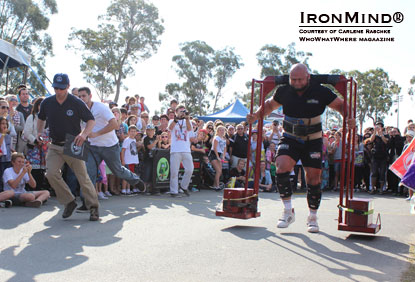 “In his preparation for his 8th WSM, Derek [Boyer] has been training hard for the big event with special mention of his Yoke training.  Derek considers this his signature event and over the years has set some great times with big poundages,” said Bill Lyndon.  IronMind® | Courtesy of Carlene Raschke/WhoWhatWhere Magazine.

Derek Boyer’s World’s Strongest Man campaign is drawing near for the old warhorse and he continues to push the limits with his record breaking training routine and at the age of 42 still sees himself having a go well past 50 years of age, Derek said today.  Once he has finished at the WSM level he will continue to push the limit with single record attempts for his own health and well being and to stay in the groove for as long as possible.

Derek has always pushed the envelope with maximum strength movements: his signature event is the super Yoke and he has also moved some very impressive Hip Lifts with a recent maximum of 1012 kg.  Derek said there are a few more world record attempts on the cards in the next year but he is keeping them close to his chest.

Derek styled himself from the old school of strongman with his creative flair and sometimes crazy event ideas with his motivation coming from the grandfather of strongman, Douglas Edmonds.  Douglas took Derek under his wing in 1996 for his first World’s Strongest Man
appearance and that brought out the Island Warrior with full war paint and ready to dance with the great strongman warriors of the 90’s.

Now 15 years later, his drive and passion still burn strong inside to lift the biggest rock and to walk the heaviest yoke with showmanship.  Now Derek is n his final preparations for his 8th appearance at WSM, which has spanned a record 15 years of service to the sport—which I guess would be a record in itself.

With many of the new breed of Elite Strongman having not yet worked out the formula to be successful in this sport they should look back to the unique and charismatic champions of the past and embrace the concept of showmanship and there ability to present on the field as this is the key element for TV and Derek knows the game upside down inside out.

So when you young Bulls meet up with the old Bull at WSM, shake his hand and treat him like your uncle and I’m sure he will pass on some of that old school strongman wisdom.