Venice, California - Dave Ostlund trailed Mariusz Pudzianowski going into the final event, the Atlas Stones, and they were the final pair to go. 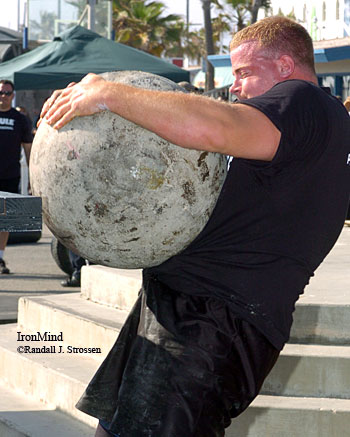 Pudzianowski had been tagged as the contest favorite from the outset and Ostlund had sleeper status because there was talk that he was in really good shape and was capable of a top finish - not even his believers would have been likely to say that Ostlund would end up claiming all the marbles, though.

The final positions and places were:

As a result of their placings, Dave Ostlund, Jesse Marunde and Karl Gillingham have now qualified for the 2007 MET-Rx World's Strongest Man contest (Mariusz Pudzianowski had already qualified, based on the WSMSS Mohegan Sun Grand Prix).