Pleasanton, California - At the end of the first day of competition, Dave Barron leads the Heavy Events World Championships. 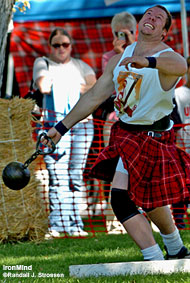 The personable Highland Games heavy had a great day today - following his win in the light hammer, the day's second event, Dave Barron set a new World Championships record in the 56-pound weight for distance.

Barron finished the day with 10 points, and the defending world champion, Ryan Vierra, was next, at 16 points. Dave Brown is in third place, at 17 points, Sean Betz is in fourth, at 18 points, and Kyrylo Chuprynin, is in fifth, also at 18 points.

Vierra kidded the laid back Dave Barron, saying, "You better bring your A game tomorrow."

There had been hopes of a +18-foot throw in the (standing) weight for height, and while he missed at 18' 6" Kyrylo Chuprynin did deliver a very impressive 17' 6" throw.