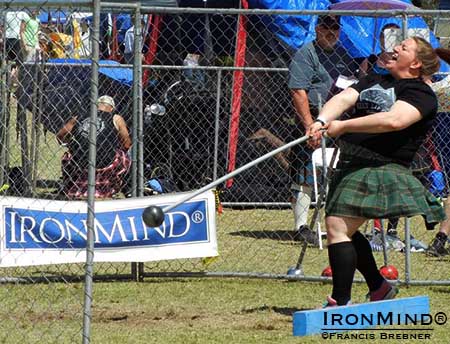 The 2014 Arizona Scottish Gathering and Highland Games, held this past weekend, celebrated its 50th anniversary and attracted fifteen thousand spectators over the two days of festivities.  A total of 135 athletes competed, covering pros, women, masters, novice and amateur A, B and C divisions, making this the biggest group of athletes to date.

The highlight of the games was the 2014 Women’s World Highland Games Championships, with a new sovereign being crowned.  The setting for the games was truly magnificent, with the heavy events being center stage and run like clockwork from start to finish.

The athletics was organized by Ryan Seckman and his crew.  Ryan has been the athletic director of the games for eighteen years and is the main individual responsible for bringing the heavy athletics to the level where it is today.

The 14-lb. light weight-for-distance was a close event between Pockoski, the former world record holder, and Curry, both having throws in excess of 70’, with the win finally going to Pockoski, who nailed her second victory with a throw of 75’ 6”.  Curry was at 75’ 9”, and Burton took third at 70’ 1-1/2”.

Moving on to the 12-lb. hammer, Curry and MacDonald were at loggerheads, with Curry claiming the win with a throw of 90’ 7” over MacDonald’s 90’.  Third place was Pockoski with 88’ 9”.

The 28-lb. weight-over-bar ended in a tie between Burton and Curry at 17’ 6” with the win going to Burton, who had fewer misses; third place was Pockoski at 16’.

The 10-lb. sheaf toss was won by Steingraeber at a height of 25’, with second place a tie between Burchett and Carr at 22’.