He’s being called the best Scottish hammer thrower of all time—Highland Games competitor Dan McKim broke the world record for both the 22-lb. and the 16-lb. hammer at the Utah Highland Games, and IHGF CEO Francis Brebner called the action for IronMind. 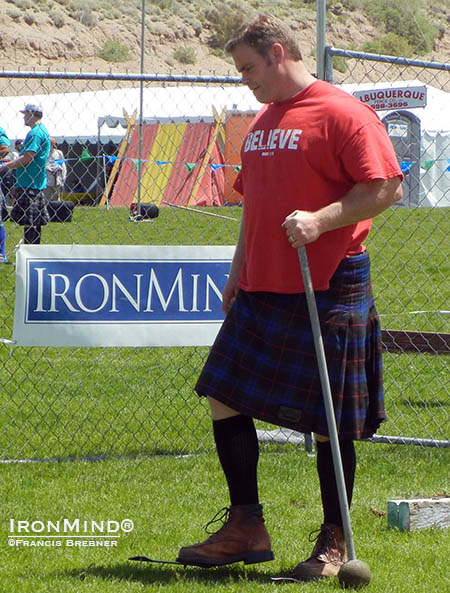 Highland Games standout Dan McKim is a study in determination, but more than that, his T-shirt says it all: Believe.  IronMind® | Francis Brebner photo

Only a month before, at the Rio Grande Valley Highland Games in New Mexico, McKim set a new world record in the 22-lb. hammer with a throw of 129’ 11-1/2”, a record previously held by Matt Sandford of Australia of 129’ 10” which he set at the Halkirk Highland Games in Scotland in 1997.

So far this season McKim has been unstoppable, coming out with all guns blazing.  Several throws with the 16-lb. hammer had come very close to the world record of 156’ 8-1/2” established by Scotland’s Bruce Aitkin in Aboyne, Scotland in 2000.  But this weekend it was destiny and divinity for McKim as both hammers fell together, validating McKim as the greatest hammer thrower of all time and the third athlete ever to break both hammer records at a single games.

The 56-lb. weight-for-distance was McKim’s second win, a personal best and a world-class throw of 47’ 5”.  Fouling on an extra attempt, he declined two additional attempts to rest and save himself for the hammers.  The current world record is held by USA’s Eric Frasure at 49’ 10”, for comparison.  Gustin took second at 44’ 4-1/2” and Williams third at 43’ 6”.

McKim has been improving games after games, churning out field and world records at nearly every competition he participates in.  Now, adding two world records in the hammers at a single games, as well as knocking on the door of both weight-for-distance world records, there is no doubt in my mind that here is man who is still improving and will turn out to be the greatest heavyweight athlete of all time!

McKim noted it felt pretty unbelievable to be both world champion and world record holder in both hammers:  “I never dreamed I would be doing this, in this position.  We can make all our plans and dreams but when God takes over, it just blows you away with what He can do.”