He came in as the favorite and left as the champion: Dan McKim won the 2011 IHGF Highland Games World Championships yesterday at Loon Mountain. 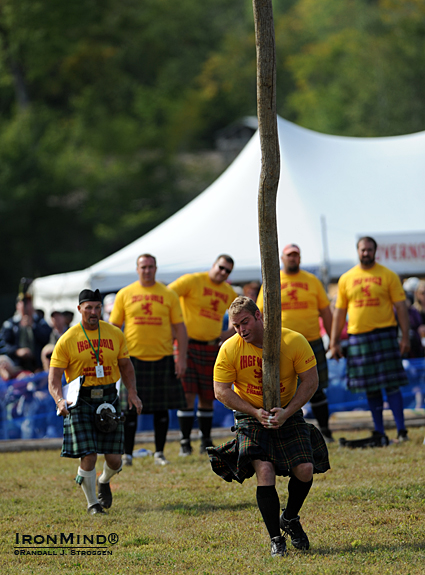 The caber, a local oak selected and cut by Bill “Doc Rock” Crawford, was tough—long, heavy and with a twist—but Dan McKim turned it for a 12 o’clock on his way to winning the 2011 IHGF Highland Games World Championships at Loon Mountain over the weekend.  IronMind | Randall J. Strossen photo.

It was a fabulous weekend in the beautiful setting of Loon Mountain, New Hampshire which was the host of this year’s IHGF World Highland Games—where twelve of the world’s top Highland Games athletes battled it out for the most coveted title in Highland games.


Record numbers of spectators in the tens of thousands traveled from all over the U.S. to be part of these premier Games, enjoying the many festivities and attractions and to observe firsthand the world’s best heavy athletes thrash it out over the three days which also included the IHGF World Hammer Championships and also the IHGF World Super Series for 2011, all of which could not have been more fitting with such a majestic setting as Loon Mountain.

The heavy events got under way with the IHGF World Hammer Championships on Friday evening with the 22-lb. hammer.  USA’s Dan McKim took the win after a hard tussle between Scotland’s Craig Sinclair and USA’s Mike Pockoski with a throw of 116’ 6-¼ “. In second place was USA’s Mike Pockoski with 115’ 5” and  in third place was Scotland’s Craig bg Sinclair with 113’ 4-¾ “.

After the total distances of the hammers were combined, Pockoski was declared the worthy winner of the 2011 IHGF World Hammer Championships, with McKim in second and Sinclair in third.     Saturday’s events began with the 16-lb. Open stone which was just magnificent to watch as Matt Vincent blasted out the winning putt to 60’ 4-¼”  to claim the win and a new World Championships record.  In second place was Sebastian Wenta with a distance of 56’ 5-¾”  and in third was England’s Scott Rider with 56’ ¾”.

The 56-lb. weight for distance was surprisingly won by Matt Vincent with a throw of 45’ 8-¾” for his second win in succession and a personal best for the young war horse.  In second place was USA’s Dan McKim with 44’ 1-¾”  and in third place was Mike Pockoski with 41’  4”.

The caber, which was 19’  6” long and 135 lb. was a won by McKim on his last attempt as he nailed the win with a perfect 12 o’clock toss.  In second place was Rider with a toss of 11:50, and in third place was Matt Vincent with 11:50 on count back.
The final event of the second day of competition with the 56-lb. weight over the bar and this was one of the most riveting competitions of the season I have witnessed with McKim taking the win with a height of 17’ ; in second equal was Betz and Wenta at a height of 16’ 6”.   The third and final day of competition in the IHGF World Championships opened with the 22-lb Braemar stone and this was undoubtedly one of the highlights of the championships with Poland’s Sebastian Wenta pulling off a hat trick by winning with a colossal putt of 48’ 8-½”, establishing a new world record and also a new championship record and also a new ground record.  In second place was Matt Vincent with 46’ 8” and in third place was Dan McKim with 45’ 2”.  The final event, the 28-lb. weight for distance, turned out to be a sensational finish for the young Matt Vincent with a winning throw of 85’ 10-¼”.  In second place was Sean Beyz with 85’ 9” and in third place was Scott Rider with 84’ 1”.   Overall placing in the IHGF World Highland games Championships:

Reflecting on the weekend, all athletes commented on how these world championships were undoubtedly amongst the best ever that they had competed in.

A lot of recognition has to be given to Bill and Holly Crawford along with Ray and Cinda D’Mante, who without a doubt are the backbone of the heavy athletics, and their efforts and energy have made these Highland Games world renown: They put together a first class event which made a very big impression on all the IHGF officials and its athletes.