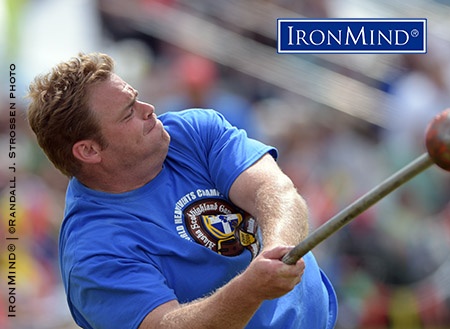 IHGF president Francis Brebner at the mic, ably assisted by the Kaz, called the action, starting with the open stone, where defending champion McKim got a slow start in fifth place to challenger Vincent’s third.   Vincent edged out McKim in the 56-lb. weight for distance by a slim 4”, only to be walloped by McKim in the 16-lb. light hammer, where McKim set a field record and outdistanced second-place Matt Doherty (Canada) by more than half a foot. Vincent was sixth, leaving him 2 points down.

Day two promises more excitement as the action continues and the 2106 IHGF world champion will be crowned.