Santo Domingo - Just when it looked as if the Chinese sweep would going to extend through another class, the French Weightlifting Federation served up a surprise dish, in the form of Vencelas Dabaya. 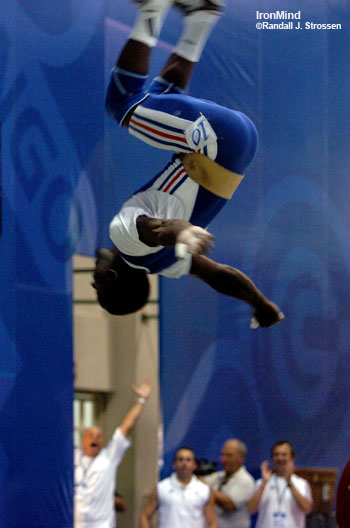 If you weren't at the 2006 Europeans, Vencelas Dabaya (France) might not have been on your radar, but after his performance here today in the men's 69-kg category, that won't happen again.

This left Shi out front, but not by much, and the snatch is his better lift. Importantly, Debaya, who has a very strong clean and jerk was only four kilos behind Shi and one behind Binay.

Armen Ghazaryan (Armenia), who had bombed in the snatch, was hunting for a medal in the clean and jerk, and he opened with 170, followed by a very nice 178 on his second attempt - he's a squat jerker, so Shi wasn't the only top guy in this class who didn't split. Shi, who had opened with 172, had made an easy 177 in the meantime. Debaya, who had opened with a very nice 178, made a very strong lift with 182 kg on his second attempt - good enough for first place in the jerk and in the total. Shi took 182, trying to leapfrog Debaya, but he couldn't stand up with the weight. Ghazaryan had one shot left and he went for the gold in the jerk, but even though he cleaned the weight, he never really tried to jerk it.

There were two attempts left, and one of them belonged to Demir Demirev (Bulgaria) - looking for a big hit, he took 186, aiming for the gold medal in the jerk and the total, but all he did was a pull.

Dabaya had the silver in the snatch, the gold in the jerk and in the total, and he was the 500th world champion in weightlifting, but why quit now? On his third attempt, the last in the class, he stuck 186. 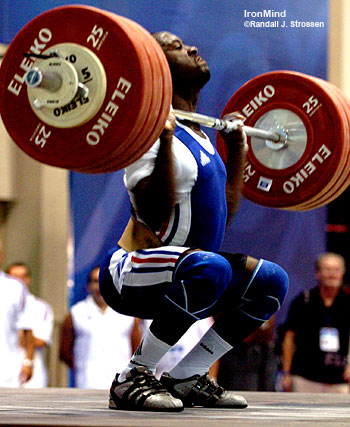 Vencelas Dabaya meets 186 kg - this was just frosting on the cake because he'd already won the gold medal in the clean and jerk (and the total) in the 69-kg class at the World Weightlifting Championships today. IronMind® | Randall J. Strossen, Ph.D. photo.