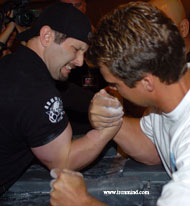 Bill Brzenk (right) beats Simon Berriochoa (left), on his way to the winning the overall championships. Both Simon and Bill had won their respective classes, and both qualified for the 2006 Arnold. IronMind® | Randall J. Strossen, Ph.D. photo.

2006 Arnold qualifiers on the men's side were:

Tamara Mitts won the women's right hand 0-143, Judy Dodd was second and Jennifer Hoffer was third; and all three qualified for the 2006 Arnold.

For full contest details, as well as news about the 2006 Arnold armwrestling competition, please be sure to check the official USAA website.