Sure, the second leg of thoroughbred racing's Triple Crown is on Saturday, but across the country, in a very different setting, arm wrestling cognoscenti will be focused on the first stage of their Triple Crown, which promises to be a doozie. 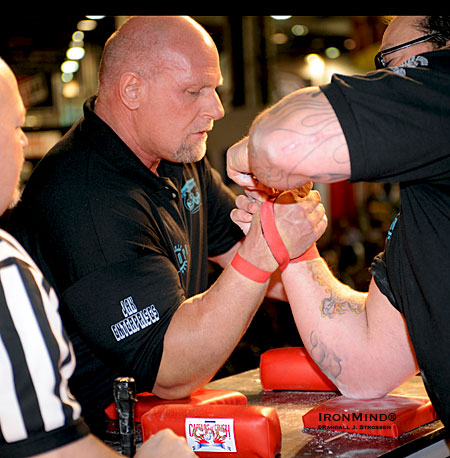 Leonard Harkless (left) keeps an eye on things while Tim Bresnan (right) fine tunes the strap when he and Rich Lupkes (center) got ready to rumble in the jungle at the 2008 Arnold. Watch for a potential rematch and other outstanding bouts this weekend at the Tahoe Biltmore, when some of the world's top arm wrestlers hit the shores of Lake Tahoe. IronMind® | Randall J. Strossen photo.


Instead of being the "sport of kings," this is a sport with barroom origins and its champions might not get the seven- or eight-figure contracts of the elite in major sports, but make no mistake about it, these people are very good at what they do and when they square off at the table, eyeball-to-eyeball, it's hand-to-hand combat in the most iconic of all tests of strength.

Like Depression-era gangsters packing heat in a violin case, some of the best competitors in arm wrestling look as if they should be doing something similar with their competition arm - sometimes so much larger than their other arm that it looks as if it could belong to a different body. And these aren't arms that are merely big for the looks of it - these are the tools of destruction used to mow down opponents in the one strength sport - arm wrestling - that virtually everyone has tried at some time . . . even your grandmother has probably had a match or two in her life.

This weekend, at the Tahoe Biltmore Lodge & Casino (Crystal Bay, Nevada), watch for such big names as John Brzenk, Rich Lupkes, Tim Bresnan, and Allen Fisher - and if John, Rich and Tim all show up, this will be a battle royal that replays the Arnold and brings back memories of the original John Brzenk–Rich Lupkes epic battle in Petaluma, California over 15 years ago.