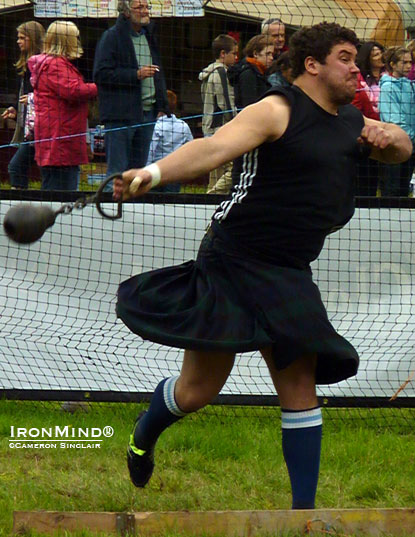 Sinclair Patience on the 28-weight for distance at the Drumtochty Highland Games.  Cameron Sinclair photo.

The Drumtochty Highland Games held this past weekend in Scotland was the fourth Games in Glenfiddich Grampian Games League series of twelve held throughout the northeast of Scotland, and about twenty-five hundred spectators enjoyed the fun and festivities.  The Games were officially opened by Chieftain Peter Nicol, the Grampian Highland Games secretary for the last twenty-five years.

As is customary, the Drumtochty Games started the program with the 16-lb. hammer, which was won with a dazzling display by Sinclair, who made a dominating throw of 137’ 8”.  King was second with 133’ 8” and Aitken third with 131’ 7”.

The 16-lb. open stone was a slugfest between the top four athletes, with Robb coming out on top with a winning of 46’ 11”.  Mere inches behind in second place was Patience with a put of 46’ 9”, followed by Colthart in third with 46’ 3”.

The 28-lb. weight-for-distance was an exciting event, with Patience producing a world-class throw of 90’ 1”, just 16” short of the ground record held by Geoff Capes.  Sinclair also threw a world-class distance of 86’ 1” for second, with Robb in third place with 84’.

As is often the case, the 56-lb. weight-over-bar was the deciding event for the overall victory between Sinclair and Robb, who ended in a tie at a height of 14’ 6”.   Third place was a five-way tie at 13’ 6” between Aitken, MacLeod, Colthart, Patience and King.

The standard of throwing in Scotland is clearly on the rise with the young blood in the sport and it will be interesting to see how they improve over the next few years.  Many thanks go especially to Glenfiddich for supporting the groundwork for these young talented athletes in the junior league.

Glenfiddich League points after 4 of 12 Games: