“After a very great final, last week in Martinique, with Zydrunas Savickas as the winner and overall SCL World Champion, we are proud to present the final rankings after 14 stages of the 2012 SCL season,” Marcel Mostert told IronMind. 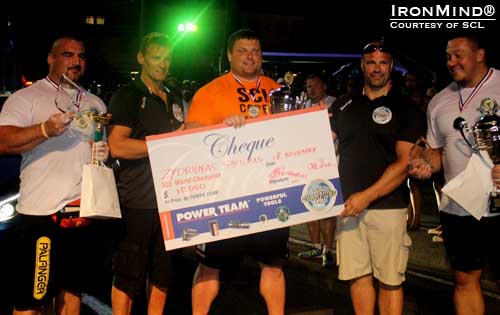 
“Same as we are proud that we could make this year so much high quality competitions all over the world, with the cooperation of our partners,sponsors and of course the athletes who did all a great job this year!

• 60 athletes competed in SCL this year .
• 15 big international competitions we made, with China as a special championship
• China was a competition with 20 countries competing, the biggest ever we made so far.
• More than $300,000 we have paid to our athletes.
• More than 10 World records have been broken in the SCL.
• 11 Guinness World records we broke, and still we are going to do some more in China next week.
• We are now broadcasting in 89 countries.

"We have made 51 Champions League competitions in the last 5 years of SCL existence and Zydrunas Savickas has won 27 of these SCL competitions and is 2 times overall SCL world champion.

“We are all very proud on this.  But, can we do it better? Yes we can.  Our calendar for 2013 is already 90% full , and we are working on the last deals and options.  Again we will have competitions in new countries, where we was never before.  Next year we will have an even bigger price money for our athletes.  We will gone broadcast in 100 countries!  14 SCL shows and 3 separate big international shows, will be made in 2013.

“Therefore, we welcome our champions again in the Strongman Champions League 2013: The league for champions, by champions," said Mostert.

For a lot of photos and full details, please visit the official SCL website. 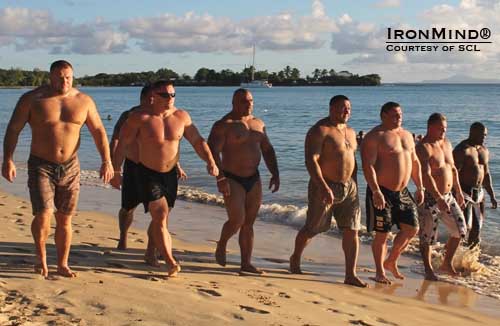 With the 2012 SCL finalists providing security, we'll bet that there were no problems on the beach in Martinique that day.  IronMind® | Photo courtesy of SCL.