Wladyslawowo, Poland - They didn't burn up the scoreboard with blazing numbers, but the men's 62-kg class at the European Weightlifting Championships today produced some close finishes and exciting lifting, and just as they had all day, the Russians led the way. 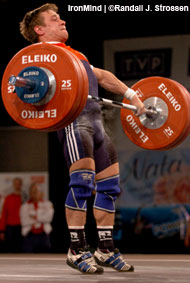 Perennial top-ranking weightlifter Sevdalin (Minchev) Angelov (Bulgaria) took three tries before he could make his opening weight of 120 kg in the snatch - when he finally hit it right, he made it look light. Of the leaders, Henadzi Makhveyenia (Belarus) opened with a good 121, Dmitry Voronin (Russia) made a good lift with 123 on his first attempt, and Adrian Jigau (Romania) hit 125 on his opener. Makhveyenia and Voronin both made 126 on their second attempts, and Jigau raised the bar to 128 on his second attempt. Makhveyenia, moving like a piston, nailed 129 on his third, and Voronin, going for gold medal position in the snatch, took the same weight for a good lift and this put him in the lead on bodyweight. Having the last attempt and being the lightest of the leaders, Jigau called for the same weight, but missed it.

The clean and jerk saw the same sort of intense competition for the top spots, as Jigau, after missing the jerk on his opener (155), came back for great success with the same weight on his second attempt, and went on to make 158, to put himself in the lead in the jerk and in the total. After he made the lift, he gestured at the bar, as if to say, "Hey, that was too light - I should have taken more." Voronin took 160 on his third clean and jerk, going for the gold in the jerk and the total, and made the lift, held if for a long time after getting the down signal - appearing to want to show his disdain for it - and then he let out a deep roar, especially dramatic because he is so short. On his final attempt, going for the gold in the jerk and total, Makhveyenia cleaned 160 effortlessly, only to miss the jerk. Angelov, trying to make up for his poor start, had the last attempt, and he called for 165 in a bid to get the gold in the jerk and the bronze in the total, but all he did was a pull.

Eariler, the 58-kg women opened up the competition today and they provided the first new European records of the competition, as Marina Shainova (Russia) rewrote the junior and the senior Euorpean record book today, sweeping away all the old records via 102 in the snatch, 135 in the clean and jerk, and 237 in the total.