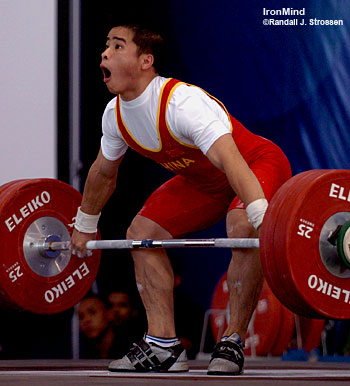 Li Zheng won the snatch by four kilos with this 128-kg lift, and he needed every one of them as he also took the gold in the total, but only by one kilo. IronMind® | Randall J. Strossen, Ph.D. photo.

Li moved through three successful snatches - 123, 126 and 128 - and he was the only lifter in the top ten with this distinction. Li has a wide squat and he plants his right foot ahead of his left foot, which might sound awkward, but it appears natural for him as his lifts looked pretty good - he had already won the gold medal with his second snatch, but as it turned out, he needed the margin given by his successful third attempt. Hoang Anh Taun (Vietnam), a MILO® favorite, got the silver with a very nice 124 and Sergio Boulet (Cuba) earned the bronze with 123, positioning himself to do something even bigger in the clean and jerk.

Wu Meijin (China) had bombed in the snatch with 121, but he seemed to be on track for a clean and jerk medal when he opened with a good 152. Li missed the jerk on the same weight on his first attempt, and that seemed to open the door for everyone who was chasing him in the snatch. Hoang made a very nice lift with the same weight on his opener, with a very deep split in the jerk and Wang Shin-Yuan (Taipei) also had a successful opener with 152. Boulet, who had opened with 148, made a good lift with 153 on his second attempt, the same weight that pinned Eko Irawan (Indonesia). Igor Bour (Moldavia) got buried with 154 on his third attempt, and Li, who had made 152 on his second attempt, got under but couldn't stand up with 154 on his third attempt, so it was wait and see time for him.

Wang called for 155, looking for first in the clean and jerk, and third in the total, but he missed the jerk behind. Wu missed the jerk at the last second on the same weight, and Hoang got under the weight, only to get bowled over and flattened out on the platform as he went over backward as he fought to save the clean.

Lee Jon-Hoon, the colorful Korean lifter, made the weight and it put him in gold medal position in the clean and jerk. Hoang came running out with 12 seconds showing on the clock, not much time even for a lifter as speedy as he is and all he did was pull - as things turned out, this was a timing error, so who knows if this might have cost him the lift. Boulet made a very nice 156 to go into gold medal position in the jerk on his third attempt, which Wu tried to leapfrog, but he missed the jerk with the same weight on his third attempt.

And on the last attempt, Wang, going for all the marbles, called for 160, which would be good for the gold in the total as well as in the jerk. He got under the bar, fought his way up, but then he missed the jerk.