Dubai - Lifting in the mens's 69-kg class, Yao Yuewei (China) had a record-setting evening at the Asian Weightlifting Championships tonight. 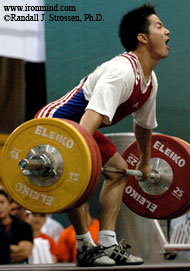 Yao opened with a good 145-kg snatch, followed with another success at 152, and then he hit a nice 156 for a junior world record and a junior continental record.

Yao's teammate Luo Shaomeng won the gold medal in the clean and jerk with 176 kg, but Yao's silver medal 175 gave him the gold in the total, as well as the junior continental record in the total. Yao's total of 331 was well ahead of silver medalist Luo's 316, who also had a little elbow room over bronze medalist Kuanysh Rakhatov (Kazakhstan), who totaled 294.

Eariler, Zhang Jie (China) got off to an early lead by snatching 132 kg, for an eight kilogram lead over his teammate Li Chunseng, and even though Li got the gold medal in the clean and jerk by running three good lifts (153, 160 and 164), Zhang won the gold medal in the total in the men's 62-kg class.

Zhang ended the night with a 295-kg total, Li finished in silver medal position with 288, and Yang Sheng-Hsiung (Tapei) got the bronze medal in the total with 271 kg, edging Krithpet Niwat (Thailand) on bodyweight.